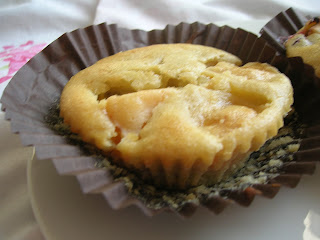 I hadn't intended to blog about these, but I ate a couple for breakfast this morning (... muffins for breakfast is allowed, right?) and they were too delicious not to share.
These muffins came to fruition (ha!) because I impulsively bought some yellow plums from the "about to expire" counter in Morrisons and then never ate them. Two weeks later, they had still barely softened so I think they'd been labelled wrong, but this turned out to be a good thing for me and my baking.
To go with the plums I had some frozen blueberries, left over from when I made the Blueberry Loaf Cake way back in January, in the freezer and also some banana juice. I can't get enough of the stuff when I'm abroad so begged my parents to bring some back from Majorca, but apparently I just don't crave it so much when I'm at home; it had probably been open for a month or so longer than it should have been, but it still tasted fine. I have never found banana juice in the UK (and believe me, I've tried), so as an alternative I think some pineapple or orange juice (maybe apple juice?) would do the job nicely.
The Chocolate Torta Di Zabaglione from Saturday tastes like something between tiramisu and a chocolate gateau. I love it because, whist being oh so enjoyable, it satisfies you in just one slice - always a good quality in my health-conscious book. It looks like a bit of a faff at first glance, but it doesn't really take that much effort and it is difficult to make a horrible mistake, so if you're feeling ambitious or are just craving chocolate I do encourage you to have a go at it.
I really encourage you to try these muffins as they are actually amazing and also provide you with a nice dose of fruit to cross off your five-a-day list. I based the recipe on the one for blueberry muffins from Nigella Lawson's How To Be A Domestic Goddess, but exchanged the milk for banana juice and just added all of the plums and remaining blueberries without looking at the quantities. Bake them now! 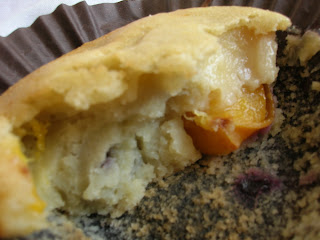 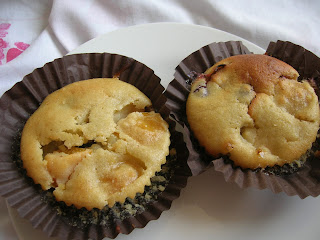 To find out how to make these muffins even better for you, look at Healthy(ish) Baking.
You really could put anything into these muffins. You could try some tropical ones with chopped pineapple and bananas and use coconut milk instead of banana juice, for example. The possibilities are endless! Whose slogan was that?
Don't forget to look out for my St Patrick's day cupcakes on Friday!