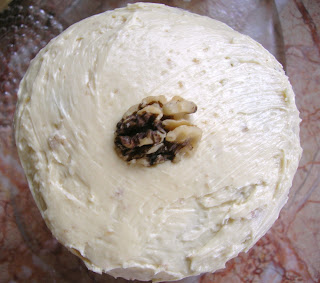 I'm not sure if coffee and butterscotch is a weird combination or not, but it tastes like a good one.

On Wednesday, as well as making Lemon Torta Di Zabaglione, I made my first successful batch of Swiss meringue buttercream. However, I quickly discovered that while it might be smooth and delightful for piping it is also very difficult to give it any flavour. I added around three teaspoons of vanilla extract to it and buttercream still tasted of nothing but butter, so despite managing to make spectacular looking cupcakes (below), when I bit into one I couldn't really taste anything.  I was so unsatisfied with the flavour that I scraped it all off the cupcakes and stirred the remainder of a bottle of peppermint flavouring into it before putting it back on the cakes again. There is now a faint but distinctive peppermint flavour but it is more an aftertaste than something that hits you when you bite into it.
Today I added half of a butterscotch sauce recipe from Mandy Dunn on BBC Food to the remainder of the Swiss meringue buttercream (I saved half before icing the cakes) to try and get a butterscotch flavour out of it and have been mildly more successful. I think that the problem with this is that there is so much fat in the buttercream that any flavouring just rolls off it. The science behind it (or what I think is the science behind it, anyway) is that the fat repels water-based substances but it will be attracted to flavourings without water in them. This is harder to achieve than meets the eye and since any drying agents that I am familiar with are probably toxic, I might have to find an alternative. Perhaps adding the flavouring before the vast amount of butter will allow it to combine with the meringue and hence be less repelled when it comes into contact with the butter. 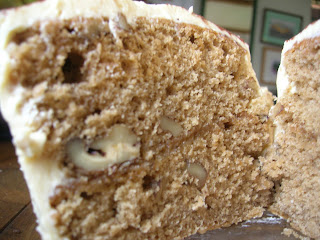 Those of you who hate science can wake up now.

Normally I would have made a normal sandwich cake but I thought that since it'll just be me and my Dad in the house next week (my Mum and sister are heading up to Liverpool) I would just make mini ones instead so there'd be less for us to get through. Naturally, I then forgot the logic behind what I was doing and baked a whole batch of cake mixture, ending up with the same amount of food as I would have done if I'd just gone for a simple sandwich cake. Sigh.

I used round cookie cutters to cut out circles from the cooked sponge, but the cutter was too large to cut four pieces from the same cake so I used a slightly smaller one to cut some more of the cake out. As I'm sure you can imagine, there was a fair amount of leftover cake, but somehow over the past three years of studentdom I've developed an aversion to wasting perfectly good food, so instead of throwing the remaining cake away I used the other half of the butterscotch sauce recipe, mashed up the leftover sponge, stirred them together and pressed it into some cookie cutters. Apparently there's only one of each size of cutter so the puddings aren't quite uniform in size. If you're interested, these Coffee and Butterscotch Puddings, as I have named them, are exactly as calorific as the cakes, so if you're on a diet you can't win.
Believe it or not, this was the first time that I made a coffee cake (as far as I can remember, anyway) and I didn't want to do the coffee flavouring wrong so I looked to Nigel Slater to see how he flavoured his. There are walnuts in the cake, but if you don't like them or have an allergy then obviously leave them out. You may have noticed that the cakes are a bit wonky, and that's because I didn't really think about levelling them. I think they still look pretty appetising, though.
Ingredients
For the sponge:


For the butterscotch:
For the Swiss Meringue Buttercream:
Recipe 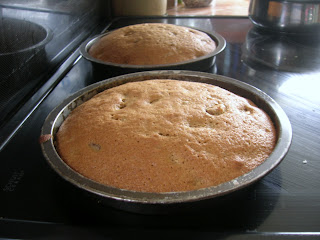 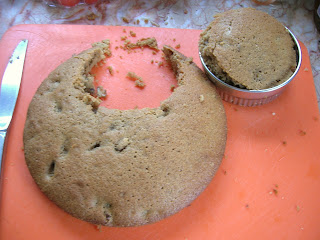 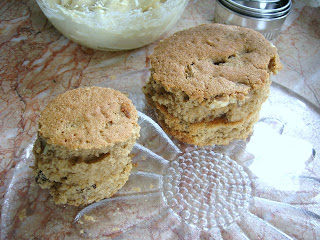 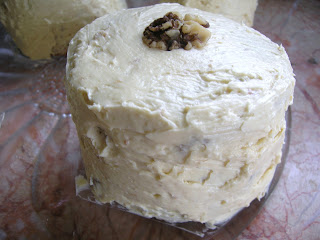 I have to say that these cakes taste really good. The buttercream still doesn't have a definitive flavour but because there is less of it it contributes more to the texture of the overall cake and I wasn't overwhelmed by a mouthful of buttery air, as I was with the original cupcakes. The butterscotch filling is not incredibly detectable so maybe a larger amount of butterscotch should be used next time. I think the sponge could also have done with another teaspoon of instant coffee as the flavour didn't particularly stand out. Despite the flaws, though, I'll definitely make these again.

For help with separating eggs, making a basic cake mixture and finding out whether your egg whites have reached a stiff peak consistency (amongst other things) take a look at The Basics. For a photo tutorial on how to make Swiss meringue buttercream and what to do if it goes wrong, go and read the fantastic post by Sweetapolita. I really need to try the ruffles in the first photo on that post, too.

The round-up for the We Should Cocoa March challenge (something green) was posted today, so go and take a look at what other people came up with. You may recall that my entry was the Guinness Cupcakes; if you haven't tried them yet then put it on your To Do list because they were amazing. Other notable entries include Grasshopper Squares (from Chele at Chocolate Teapot) and Mint Chocolate Cupcakes (from Mel at Sharky Oven Gloves).

I'm going to make chocolate chip cookies soon and on Saturday (possibly Friday) I'm going to make a Chocolate Peanut butter Cheesecake from Nigella's Kitchen so that I can eat it guilt-free on Easter Sunday (when else besides Christmas can I eat so much chocolate and other junk guilt-free?) on my journey back up to Newcastle. How does one manage to book a train on Easter Sunday without realising? You'll have to wait to find out...