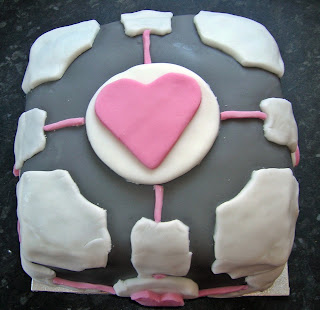 This is a triumph...


For those of you who don't spend hours of your life gaming, Portal is a computer game in which you wake up as a test subject in the Aperture Science facility. In order to escape (and recieve cake), you have to go through a series of rooms, solving laser-ridden puzzles along the way in order to proceed. You are armed only with a gun that can shoot portals into walls - the use of these is paramount to moving forward. The only other character in the game is a sarcastic and malicious robot that controls the testing facility. She gives you a 'companion cube' to look after for an entire level, then cruelly forces you to destroy it. (The quote above is in reference to the song from the credits.) 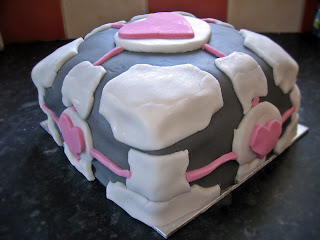 Anyway, this is a replica of the companion cube, made for D's birthday. It was my first time using fondant icing and I'm very happy with the results. It was surprisingly easy to use and there was actually very little room for error. The only real problems came from the complicated scaling I had to do in order to get the white sections of icing right. 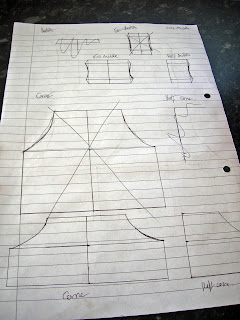 In the end they were still a bit iffy and the cake is more a cube as viewed from above because, even with four layers, I couldn't manage to get the cake to 20cm tall. I think I could have managed it if I'd doubled the amount of batter per layer, but you wouldn't believe how much I already had to buy for this cake and buying extra sponge ingredients was a step too far. 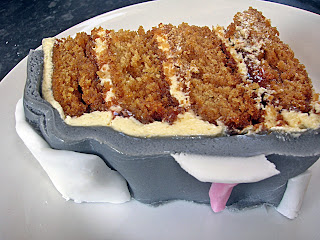 I am also over the moon because my theory about why Swiss meringue buttercream wouldn't take to any flavourings (and tasted like an airy mouthfull of butter) was correct, or at least by using my chemical knowledge I was able to fix the problem and made a batch of wonderful vanilla-flavoured buttercream. If you want to know the technicalities behind it, I think that it's because the fat molecules repel the water-containing flavouring molecules, so in order to get around this you need to put the flavouring into the mixture before adding the butter. The egg whites aren't very fatty so will not repel the flavouring and will combine with it nicely so that when you come to add the butter the flavour is already there. 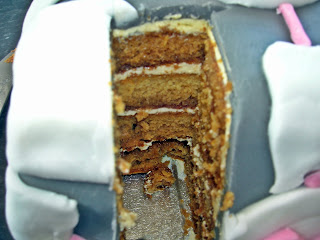 If any of you actually try to make this cake, do plan accordingly because the cake is best decorated after the sponges have been frozen for at least four hours and ideally overnight. The icing procedure will then take at least an hour. Having said that, I'm glad I took on this challenge. I might even accept the odd non-housemate birthday cake request or two.

For the filling:
For the icing:
Recipe 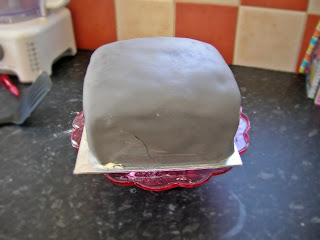 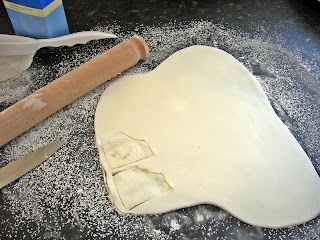 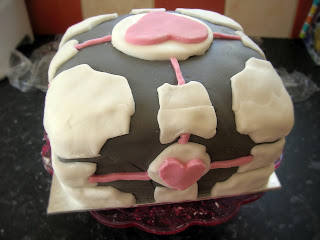 If you have any leftover icing (I had quite a lot as I didn't want to get caught short), just wrap it in clingfilm and store it in an airtight container. It should keep for a few weeks. Don't make the icing shapes ahead of time as apparently they dry out very quickly so will crumble when you try to use them.

For tips on skills like creaming and whisking and separating eggs, have a look at The Basics.

You'll be pleased to know that the cake was very well recieved this morning and tastes very nice. I think I could have done with thicker layers of buttercream, though.

At the weekend I'll be making a Jubilee Cake, so look out for that!