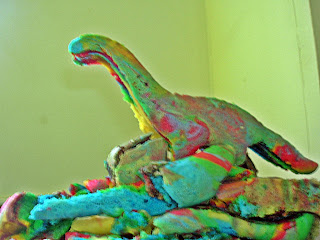 This recipe's name is not only a mouthful but making it took me quite a while - it was quite an enjoyable task, but one of those where the time flies and before you know it it’s 8pm and you’ve not eaten dinner yet. Quite a few biscuits disappeared not long after they were finished so I am assuming that they were quite nice – I didn’t eat any of the finished products but I ate enough of the biscuit pieces (see later) to know that they should taste quite nice.

One of my housemates showed me these piñata cookies and asked me to make them, so a few days ago I went on a mission to find a suitable cookie cutter. Of course a horse is a very specific and unpopular shape so the best I could do was a dinosaur (from John Lewis).

The link to the piñata cookie tutorial does not provide a sugar cookie recipe, so I looked around my favourite blogs and found a few different ones; eventually I chose the recipe from Sweetapolita because Rosie (the author of the blog) was the only one who gave the ingredient quantities in metric as well as in cups. I don’t really understand the cup system so I try to avoid it where I can; I might invest in a set of measuring cups one day, but for now I will just continue to skirt around the idea.

The recipe didn’t provide a dough that was solid enough so, when it came to slicing it up, it didn’t keep its shape very well and I had to use a complicated knife-and-spatula manoeuvre to transfer slices of the dough to the baking sheet. Another problem that I had was that the layers of coloured dough weren’t as tall as the dinosaur so I ended up putting two slices together. The moral of this part of the story is to pick a shape that can be laid on its side or isn’t taller than about 3 inches.

To rectify the dough problem, I’ve altered the flour-butter ratio so if you have the time to try this recipe you shouldn’t have to master any complicated dough-moving manoeuvres.

The next part of the task, once the dough had been baked, was to cut out and arrange the dinosaur biscuits. I actually managed to get two dinosaurs out of most of the biscuits I’d made, which was useful as to make them into piñata-type biscuits it was necessary to stick them together, using a smaller piece of biscuit to hold the sweets between them.

To make the bit that holds the sweets, I just took rectangles of leftover biscuit (the method is quite wasteful when it comes to leftover biscuit – I filled a whole Tupperware container with broken bits) and used an apple corer to cut two circles into the middle. To assemble the piñatas, the three parts get stuck together with some icing.

The biscuits were supposed to be striped, but I quite like the marbled rainbow effect that has been achieved. They’re a bit puffed up because I didn’t have enough plain flour so made up the difference with self raising flour – if you make your own they should be flat. 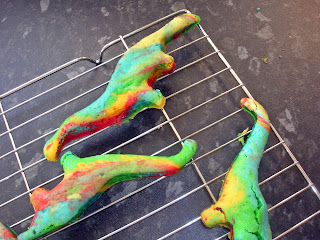 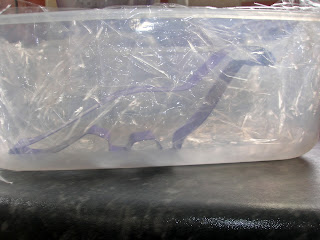 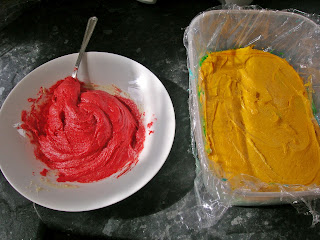 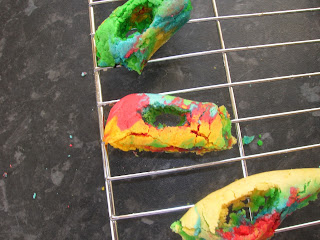 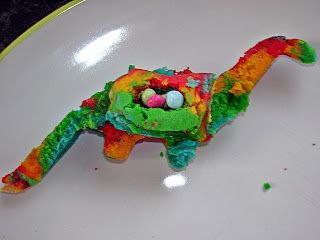 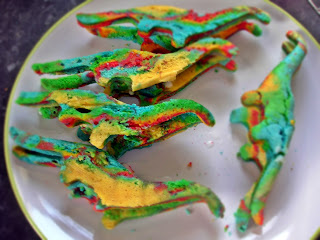 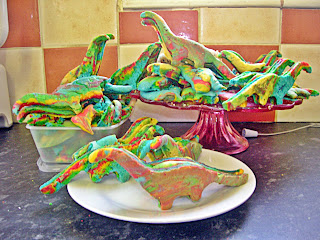 Miraculously, I was still full of energy when I was done with this and proceeded to make my dinosaurs stand around my cake stand in a dinosaur-like manner (see the above photo). If you’re at a loss for what to do with the remaining bits of biscuit, you could always make some leftover cookies.

Like I said, these biscuits are by no means economical on the waste front but I can’t see any other way of keeping the stripes in the dough. If you find a better way to go about it, please do let me know!

I'll be posting a chocolate cake on or before Saturday, so look out for it. Have good week - if we're lucky it might start to warm up any day now... 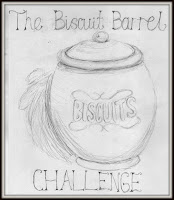 EDIT: I'm entering these into the April 2014 Biscuit Barrel challenge, hosted by Laura at I'd Much Rather Bake Than... The challenge is to bake anything that fits into a biscuit barrel and classes as fun... I think these fit the bill!