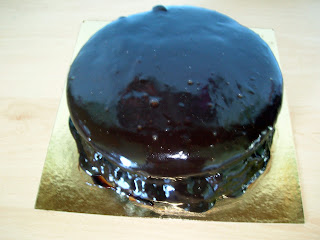 This is essentially my Chocolate Fudge Cake with bananas in it. I made it for a friend at work as it's his birthday on Thursday. Normally I'd have brought it into work but we worked out that we won't actually be working at the same time until mid July so I thought it would be better to bring it to the pub for his birthday drinks sesh, which everyone at work went along to. The pub staff were kind enough to bring the cake out for us even though they were busy catering for the England match in another room. I've told you before how little interest I have in sport, but a few of the people I was with wanted to know the score so kept craning their necks to see what was going on on the TV across the bar, and we got the general gist of what was happening from all the cheering. Apparently we won! 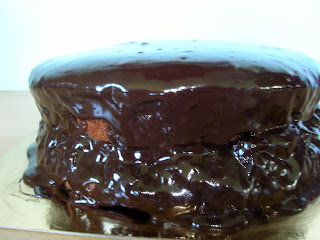 You may remember how much I loved the Chocolate Fudge Cake - it was literally heaven on a plate - so I have high hopes for this one. Banana and chocolate is always a winning combination, but this can have disastrous consequences for the waistline if one is not too careful, for example the last time I made the Chocolate & Banana Loaf Cake I ended up eating at least half of it in two days. Not good.

The weather seems to have finally noticed that it's actually supposed to be summer and we've got a small heatwave (only 16-18C, not too exciting) coming up here in Devon over the next few days. I'm always dubious about sitting out in the garden here because as soon as the sun disappears behind a cloud you're plunged into cold. Seeing as there is almost always a cloud hovering threateningly nearby, I just sit in the (considerably warmer) conservatory and pretend I'm in the Mediterranean. As I'm typing, the conservatory is a balmy 30C - much better. At least at 16 degrees we can justify wearing shorts and possibly even not have to wear a jacket or long sleeves. Possibly. 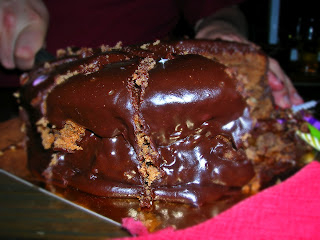 I warn you that this cake is not diet friendly, even if you employ all of the Healthy(ish) Baking tips I've given you. Best to save it for a treat. Or bake it, then take it to work and offer it to the masses so that even if you want to eat more you can't because it's been hoovered up by everyone else.


For the icing:
Recipe: 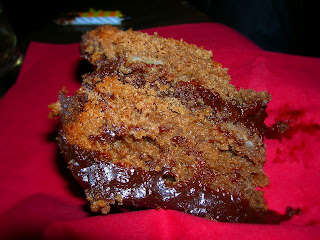 I'll be making two more cakes this week, so look out for them. I hope the weather is at least vaguely summery wherever you are!