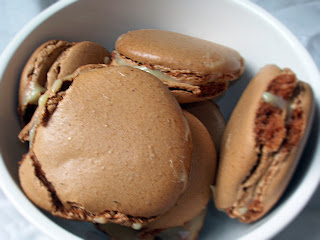 You may be asking yourself what a Chocolate Russian is, and I'm here to tell you that unfortunately it is not a cocktail, though I wish it were! These were originally going to be Black Russian Macarons, but I was in a chocolate mood and put cocoa in the macarons instead of coffee, assuming I would find a cocktail to match later - alas, I did not. Why does it have to be a cocktail? Because this is my entry to this month's We Should Cocoa, hosted by Choclette of Chocolate Log Blog (and co-created by Chele of Chocolate Teapot), and the theme is a chocolate-spiked cocktail. Hopefully Choclette will allow this twist on the traditional!

These are not the most perfect macarons, and rather more of them cracked than in my first attempt but I still considered them a victory because the last two batches of attempted macarons that I made did not turn out well. I'm still getting used to my new oven - I've always had fan ovens, but this one seems a little more ferocious - so we'll put that down as the main cause of the imperfections.

I filled the macarons with a vodka and coffee liqueur white chocolate ganache. Since reading on Homemade By Fleur that ganache can be made with any liquid providing that the ratio is correct, I have been waiting for an opportunity to put this suggestion to the test. I was a little nervous at first that the alcohol would prevent the chocolate from setting (I think I was confusing it with freezing alcohol in ice creams and such), but once cooled, the ganache had indeed set into a runny consistency, so I was happy. My only qualm is that it made the macaron shells slide around a little bit when I sandwiched them together, and as you can see from the pictures it also ran down the sides of some of them when I'd been a bit too liberal with the ganache.

To those of you with spoon-licking habits, a word of warning: that ganache is stronger than you might think, and a spoonful is not at all delicious. This was not at all learned from my own experiences... 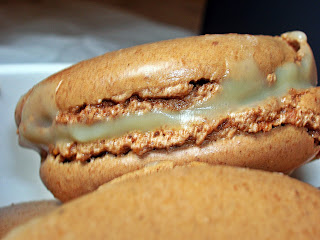 I really like these macarons. They're sufficiently gooey, and the shells prevent the ganache from being too overpowering. If anyone knows a mixologist, perhaps you could suggest the Chocolate Russian for me? The recipe is based on the one for macarons from Bravetart - if you have yet to look at her site, hurry on over because it's full of great ideas. 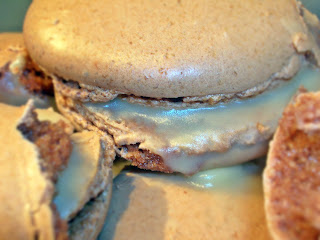 For more tips on macarons, head over to Bravetart's Ten Commandments of Macarons or check out what Fleur learned at her macaron masterclass. If you're after more cocktail-inspired macarons, Mel at Sharky Oven Gloves has you covered, with a whole series devoted to this cause!

I'll be back in a couple of days with one of my favourite autumnal dishes because, unfortunately, the autumn is upon us. I wore tights on Wednesday for the first time since April; it's gonna be a fun few months!