This is one of four cakes I made (well... assembled at least) over this weekend, all in the name of friendship.

You see, this week was the week in which four of my friends celebrated their birthdays, and last night culminated in a party for three of them. At some point in mid October, I had the insane and ambitious idea to create a three tier cake for P, M and D. After the incredibly organised and efficient way I managed to make my sister's eight layer cake in the dead of night, I thought a month would be more than enough time to plan and prep for this. Fortunately, I was right.

Two weeks ago, then, I spent a Friday afternoon doing nothing but making icing. The following Friday, I made four cakes (one was meant to be a chocolate loaf cake for me to eat but it fell apart when I turned it out of the tin). Yesterday, I finally assembled the cakes at my friends' house. The cake you see above consists of (top to bottom): Chocolate Beer Cake with cream cheese icing, Vodka Rainbow Cake with vodka icing and Mudslide Cake with chocolate Bailey's icing.

Today's cake is the Mudslide Cake, which is on the bottom layer. I made it for P because, well, he asked for a cake inspired by the mudslide cocktail,  in honour of our shared cocktail drinking habit. Mudslides traditionally consist of vodka, coffee liqueur and Bailey's. Fortunately I still had plenty of vodka and coffee liqueur left over from various baking sessions, and my mum and sister brought me a sample of Bailey's Amaretto from this year's Good Food festival in Birmingham. I'm not a massive amaretto fan and have only just got into Bailey's, so I never got round to using it until now. 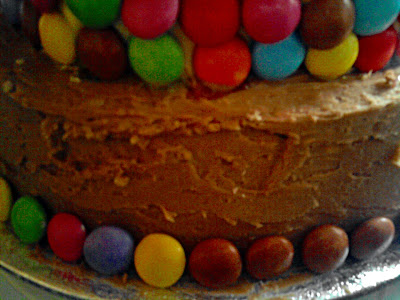 Though in the end I thought it best to hide the cake away during the party, the cake got eaten this morning and even the most hungover people still enjoyed the odd bite. The Mudslide Cake, and particularly the icing, was delicious and moist. The bite of the alcohol was removed during the baking process, so all that was left behind was the flavours. I'd definitely make the cake again on its own and think it would look particularly good in cupcake form.

This cake doesn't need the two weeks of preparation I gave it; you could quite easily bake and decorate it within the space of a couple of hours.If you do need to make it in advance, though, the icing can be refrigerated for up to a fortnight and the cake can be tightly wrapped in cling film and frozen for up to a week. Don't bother to defrost the cake before decorating, as the sponge will defrost quite happily from underneath the icing and it will be easier to ice when it isn't crumbling everywhere. The icing is based on the recipe for Nutella Cloud Icing from the very talented Sweetapolita; make sure you bring it up to room temperature before using - if it's solidified put it in a bowl over a pan of hot water and break it up with a knife, stirring until it is soft enough to whisk.

Also, please note that this cake contains a fair amount of alcohol (I basically exchanged milk for booze) so I wouldn't advise that you give it to children. If you want to make a non-alcoholic version of this cake, you could replace the coffee liqueur with real coffee and replace the rest of the spirits with milk. 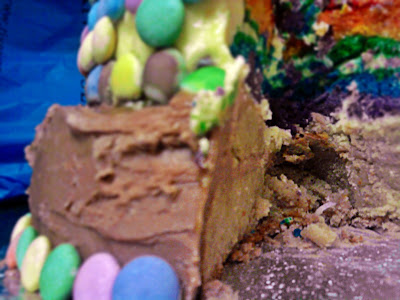 
For the Bailey's Cloud icing:
Recipe
To find out how to make this cake better for you, take a look at Healthy(ish) Baking.

As you may have guessed, this is part one of three posts about the three tiered cake. I'll post the next two throughout the week ahead, so keep your eyes peeled. 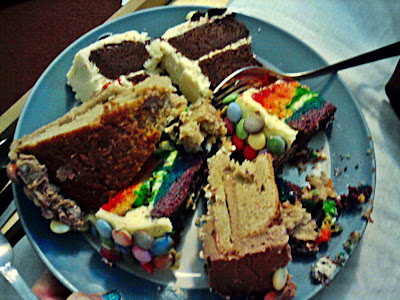