This is part two of my three part series on the three-tiered cake I made for my friends' birthdays last weekend. To read about the immense preparation that the cake required, read part one: Mudslide Cake.

The Vodka Rainbow Cake was made for M. The sponge is similar to my original Rainbow Cake, but this time I added a considerable amount of vodka to it. The icing is vodka flavoured Swiss meringue buttercream, though I was careful to keep the vodka levels tolerable enough that the icing could still be enjoyed - I'm not sure anyone would describe vodka as tasty. 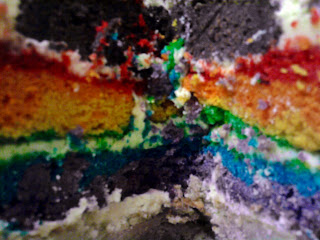 Unfortunately, the vodka flavour didn't come through at all in the sponge, though it did contribute to giving the cake a texture that I can only describe as 'smooth'. The icing had a hint of vodka flavour to it, though, which was very pleasing. 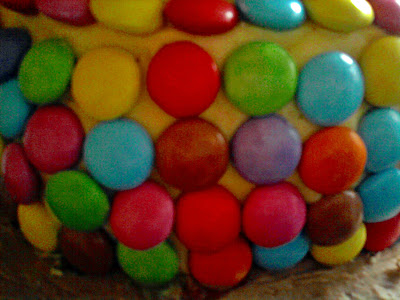 As my previous post describes, I made the cakes and icing in advance and assembled them on the day. The cakes shouldn't be allowed to defrost before decorating so that icing them is easier; the icing should be allowed to reach room temperature and then can be whisked to return it to its smooth and spreadable consistency. I would recommend freezing the buttercream rather than keeping it in the fridge if you are making it more than a week in advance, as when I whisked my icing it separated out from some of the liquid and I had to drain it off before continuing. I know that this doesn't happen if the icing is frozen instead of  refrigerated.

Curiously, as the cakes defrosted the smarties that I decorated the cakes with lost their bright colours and turned a more pastel shade, so if you intend on decorating the cake as I have I would recommend that you wait to add the smarties for 1-2 hours after adding the icing to the cakes. 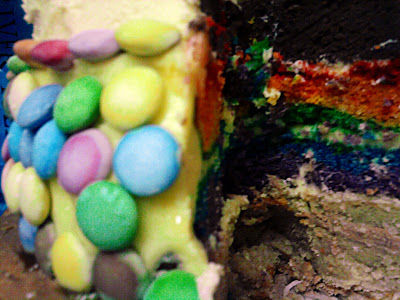 I will be back at the weekend with the final installment of the series: Chocolate Beer Cake. Look out for the Baking With Spirit December challenge announcement on Saturday - I think you'll like it!