Eight Layer Kahlua Cake (With A Rainbow Inside) 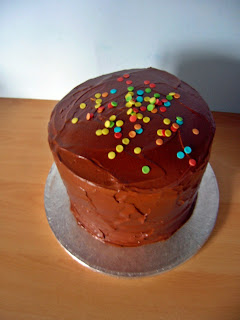 It's my sister's 18th birthday today, I can't believe it! I know she likes Kahlua, so I've been planning this cake for weeks and working out not only how to make it, but also how to make it in secret. This is a cake composed of eight layers of Kahlua-flavoured sponge with rainbow-coloured, Kahlua-flavoured buttercream in between, draped with a chocolate-nutella icing.

The outer layer of icing is Sweetapolita's Nutella Cloud Frosting, which is best made just before icing the cake, so that had to be left til last. Swiss meringue buttercream can be made in advance and frozen or chilled until needed, so I made it on Monday when I had accumulated enough egg whites (I've been making a lot of custard for breakfast lately, so each batch leaves two egg whites), then brought it back to room temperature last night before dividing it into seven and colouring each bowl of icing a different rainbow colour. 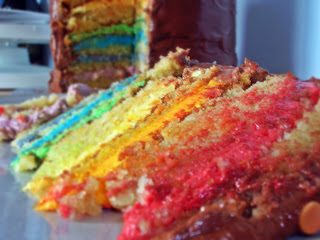 The sponge needs at least four hours in the freezer so that crumbs don't fly everywhere when icing the cake. I also needed to give them half an hour in the fridge after cooling in order to firm them up before slicing each in half, thereby turning four cakes into eight. Because of the time the cakes needed in the freezer, I was able to make them on Thursday night.

On Thursday night I was also going for a meal with everyone from work as I'm headed back to Newcastle on Tuesday and I'm unsure of whether I'll ever return to work there, dependent on finding french volunteering/interning opportunities and their duration, and if I actually find a job in the real world for when I've graduated. It was a great evening filled with laughter and Malibus-and-diet-cokes, and they gave me a going-away present, which touched me because I hadn't expected something like that at all, being just a summer worker and all. 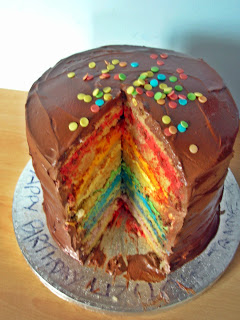 Anyway, because of this lovely meal out and not finishing work til 5pm I was pushed for time with making the cakes. Luckily I managed to make all four cakes and left them cooling on the desk in my room while I was out so that nobody would see them. I think my sister could smell baking because she asked me what I was making, so I lied and said it was a cake for work. I think she bought it!

When I returned from the meal at some time after 11pm, I put the cakes in the fridge for half an hour before carefully slicing each one in half. As you can see from the picture below, not all of them were cut evenly, but since this was my first attempt at cutting cakes in half I feel it was a job well done, purely because nothing went drastically wrong. After wrapping the cakes in cling film I hid them at the back of the freezer and hoped my sister wouldn't go rooting around the freezer in the next 24 hours.

After dinner last night, when everyone else had gone to watch something dreary on the television, I put the cake together, jumping every time I heard someone/a dog approaching the kitchen, though luckily my sister stayed away. Somehow, despite all of the preparation, it still took me three or four hours to finish the cake off, but I'm very pleased with it and feel that this was time well spent! 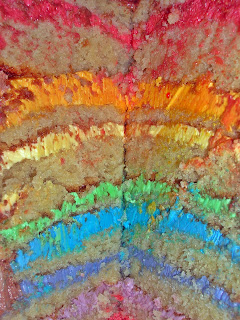 I now have a confession to make: this cake doesn't have real Kahlua in it. I know, I've tricked you all, but don't you think 'Kahlua Cake' has a better ring to it than 'Tesco Soiree Coffee/ Cheap Kahlua Knock Off Cake'? Yup, me too. And at half the price of proper Kahlua, I was never going to shell out for the real deal.

This cake tastes great though, and the Kahlua/soiree coffee taste really comes through - just as well, considering there are seven shots in the whole thing! If you're looking to wow someone, this is the cake for you.


For the Swiss meringue buttercream:
For the Nutella Cloud Frosting:
Recipe 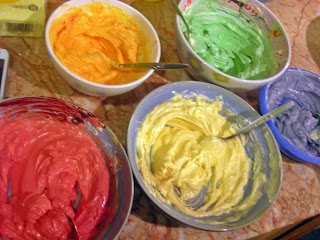 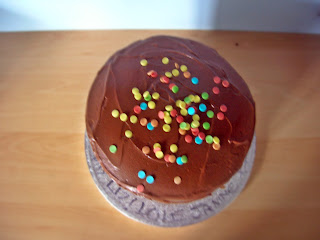 For tips on the basics of cake making, take a look at The Basics. I won't pretend that this cake is good for you, but if you want to reduce the calories, if only by a fraction, take a look at Healthy(ish) Baking - though I will warn that you shouldn't reduce the sugar or use low fat butter in Swiss meringue buttercream as you will get a sub-standard icing.

I'm going to be super busy for the next few days - working, socialising, travelling to Newcastle, then moving - but I do plan on baking my new housemate a Carrot Cake, so I'll be posting another carrot cake recipe next week probably. Have fun in the mean time!

I'm entering this into the Bakespiration competition over at Stuck In The Tree.