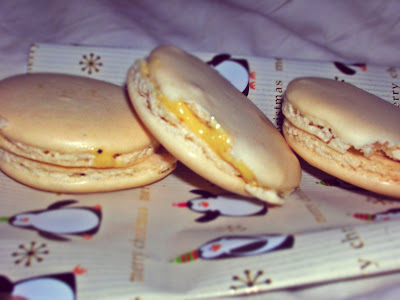 I've been hearing whispers about this thing called Buerre Noisette for a while now, so I wanted to see what all the fuss was about. I'd heard from various sources that it tasted a bit nutty (hazelnuts to be precise, hence the name - noisette = hazelnut in French) so I thought it would be perfect to try out on a nut fanatic like my dad. And yes, just in case the unseasonal background for my macarons might tell you, they were a Christmas present. Apparently I didn't have the foresight to use a non-festive background even with the knowledge that I wouldn't be posting these until after the big day. If you want to see more unseasonably depicted Christmas presents, check out my mum's present, Über-Vanilla Biscuits.


So, what is Buerre Noisette? It actually doesn't contain nuts of any kind; it's just burnt butter. The idea is that you melt the butter and let it bubble away until it browns and the fat solids start to burn, giving it a nutty taste. Personally, I found it to taste more like fudge than nuts, but maybe that had something to do with the way the flavour combined with the other ingredients in the buttercream. Make it yourself, and let yourself be the judge! You don't have to put Buerre Noisette in buttercream; it can be used in anything you would ordinarily put butter in - even on your toast. 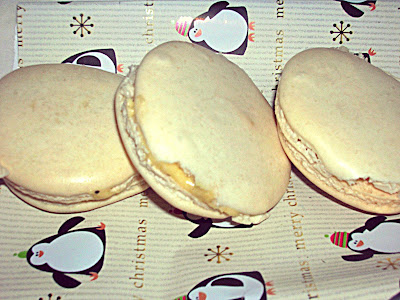 I used the recipe for Buerre Noisette by Emma at Poires Au Chocolat. There are lots of detailed instructions so you can be sure that you're not making any drastic errors. In truth, I think the main skill here, other than transferring butter to a pan, is knowing when to take the butter off the heat, so don't feel put off by the fancy name.

These macarons are plain except for a hint of nutmeg as I wanted the flavour from the Buerre Noisette buttercream to shine through. I use Bravetart's macaron recipe for tips and advice on how to make the perfect macaron, including how to stop them from cracking. It's written by someone who makes them every day so you know it'll be good advice!

Makes 25
Ingredients
For the macarons:

For the Buerre Noisette French Buttercream: 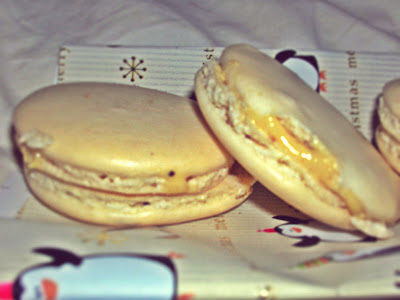 I've got three exams left, and then on Friday I'll be celebrating by baking a cake. What else would I do? I'll see you then!