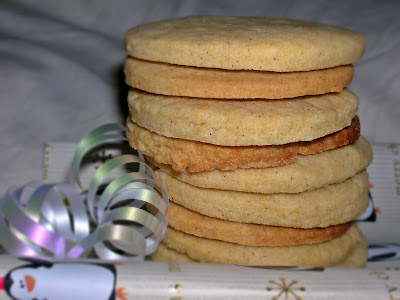 As you may be able to tell from the Christmas-themed wrapping paper under these biscuits, I made these as a Christmas present for my mum. She is a big fan of all things vanilla, so I wanted to make something special.

These may look like ordinary biscuits, but they're called über vanilla for a reason - I made them with vanilla sugar as well as vanilla essence. This was my first real encounter with vanilla beans as they are normally a little out of my price range, but I thought I'd make an exception since my mum deserved a treat!

Vanilla sugar is very easy to make; I used one vanilla pod per 100g caster sugar. Split the vanilla pod, stirred the seeds into the sugar and put everything, including the pod, into a jar. Seal the jar, then after about a week the sugar will have become infused with vanilla flavouring. This is a great way to add some extra vanilla to your life as you could even use it in tea and coffee.

From what I hear, the biscuits were very successful in that they taste very good with a high dose of vanilla flavouring to boot. I might have tried some of the dough, and though I'm not the biggest fan of vanilla I thought it still tasted pretty good. 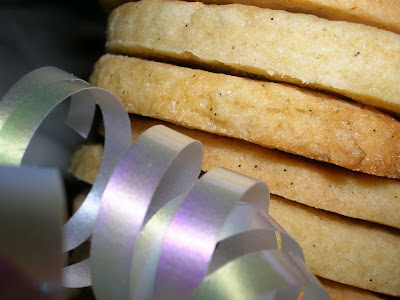 The recipe was adapted from a BBC Food gingerbread recipe (the same one I used for my Cinnamon Biscuits), though I changed a lot of the ingredients.

I can't make anything new and exciting for the next few weeks because I'm on exam lock down, so in the mean time I'll be telling you about some more Christmas presents that I made for my family. It may be just as well that I can't show you my baking at the moment, however, as the other day I forgot to put eggs in a batch of muffins I whipped up to use up some eggnog.

I'll be back next week with something full of chocolate!