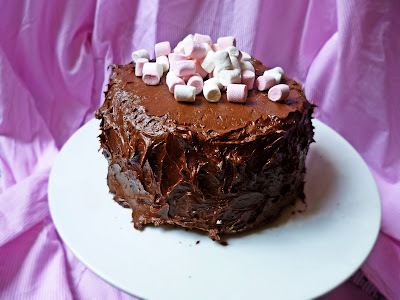 In the UK it may not be traditional to pair marshmallows with chocolate and biscuits to make s'mores, but for the purposes of this cake let's just say we do. In the heat of a self-imposed sugar ban, my sugar deprived mind started whirring, and the concept of this monster of a cake was born.

As with most cakes that I plan for a while before actually making, in the beginning this cake was no more than a vague idea for something involving marshmallow fluff and chocolate buttercream, but over the past few weeks the idea developed: the marshmallow fluff would be toasted for the toasted marshmallow campfire feeling; I would use probably the best chocolate icing ever, chocolate French buttercream; the cake would be a chocolate cake. 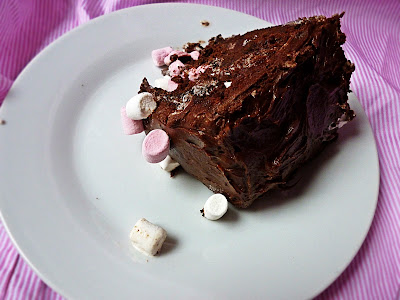 Beasty as it is, I had some help in reducing the sugar high you might expect after eating something like this using Truvia Baking Blend*. I've been a big fan of Truvia, which is a calorie free sweetener made from the stevia leaf, ever since I was sent some to sample last summer. Sugar plays an important role in baking though, so Truvia Baking Blend combines the sweetener and traditional cane sugar so that the structure of your cake won't be compromised in exchange for looking after yourself. It worked really well in this cake, and I can't taste any difference to a normal cake. The packaging even comes with a handy conversion chart; because Truvia is three times sweeter than cane sugar, you don't need to use as much as you normally would. 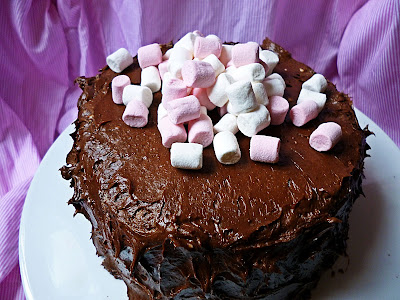 This would make a great cake for parties, and could even be served at a summer barbequeue in homage to its name sake. If you'd rather use cane sugar, just substitute 200g caster sugar for the Truvia. The cake may look great, but it doesn't take very long to make. While the cake bakes you can make the icing, then all you have to do is wait for the cake to cool before you decorate it.


For the chocolate French buttercream
Recipe 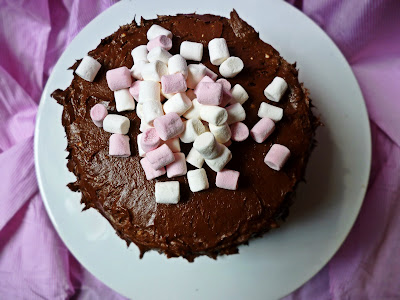 My one problem with this cake is that the marshmallow fluff did not live up to expectations. Next time I think I'll just use regular marshmallows, as they will keep their thickness and will take up a better toasted flavour.

I'm entering this into We Should Cocoa's marshmallow challenge, which is hosted by Rebecca at BakeNQuilt and is run by Choclette at Chocolate Log Blog. You've got until the 25th if you want to enter.

*I was sent some Truvia Baking Blend to test out, but all views are my own.