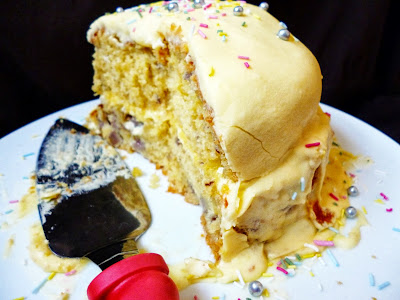 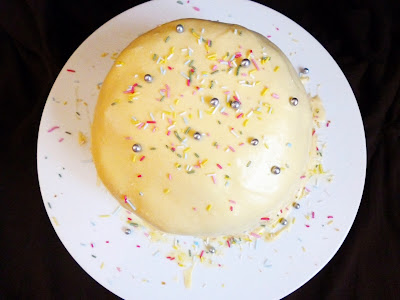 This started out with a strong desire to make a banana liqueur and put it in a cake, conveniently timing it for a celebration of Cake Of The Week's 2nd anniversary. I followed the recipe that I set out in the Baking With Spirit October Challenge announcement. At first it seemed like the bananas did not like being doused in vodka: they fermented a little too much and the resulting liqueur smelled like too-far-gone bananas. I don't really like to waste things though, so I added the sugar syrup and left the liqueur overnight. Luckily, this time did wonders and mellowed the flavour right out. I was left with a perfectly flavoured banana liqueur, even if it was a little too brown for my liking.

Though the liqueur turned out alright in the end, I hit another flaw in my plan pretty quickly. I'd been planning to decorate the cake with Swiss Meringue Buttercream, which requires a hell of a lot of whisking. This is normally no problem, but last week my electric whisk finally gave out on me and I had to throw it out. I'm not an insane person, so manual whisking was totally out of the question. Instead I had to resort to the more commonly used buttercream which uses icing sugar and butter.

Oh - and then I ran out of caster sugar, so I had to substitute in some icing sugar. Perfect. 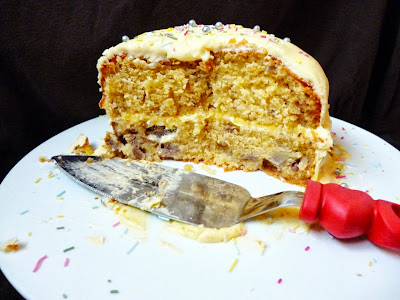 Moving on, today we're celebrating two years of Cake Of The Week. Two years ago today I posted my first ever post, Flapjacks, and a year ago today I posted my (slightly disastrous) Peanut Butter, Banana & Chocolate Cake. Last year I picked out my three favourite posts from the last year, so to celebrate another year of blogging I'm going to do the same thing (as well as eat this cake):

Though this Totally Bananas Banana Cake didn't go as intended, neither do many of the cakes I make so I think it sums up my 'roll with it' attitude to baking, which is no bad thing. I'm not a perfectionist, but when a cake does go exactly as planned it is pretty exciting. It's good to know that I can deal with it when this doesn't happen, though.

Help me celebrate two years of blogging by making this cake too! If you don't want to make the liqueur (though it has very little hands-on time - most of the time the ingredients are just sat in a jar) you could use more banana flavouring, or if you're a banana purist you can try adding lemon juice to some mashed banana, draining them and beating them into the icing. 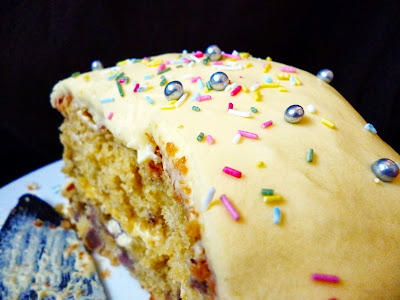 As I mentioned above, this uses a home made banana liqueur. DIY liqueurs are the theme for this month's Baking With Spirit challenge (hosted by me), so this cake is my entry. The deadline is the 28th of this month, so if you're feeling inspired then get baking!

Thanks for helping me through two years of blogging, and here's to many more!