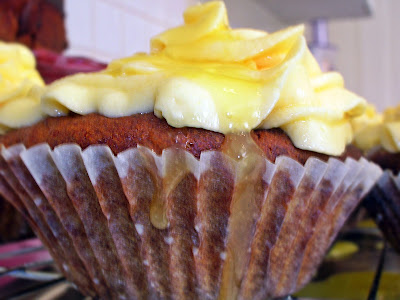 Though I did post the Baking With Spirit round-up last week I'm very aware that I didn't present you with any cake for the first time since my exams in January. I do apologise for depriving you of these cupcakes for longer than necessary, but I've had a lot of time juggling to do recently in attempts to read text books in between writing job applications - all in a fervent rush to get the bulk of it out of the way before lectures started this week (Monday was my first day of lectures since some time in early May, though to be fair the fear-induced learning and lack of a Christmas this semester due to revision for the January exams will more than make up for having so long away from academia). I am a pretty organised person, but even I might be pushed to my limits over the next few weeks as I balance applying to graduate jobs with academia, and maybe even a little free time.

However, there will always be time for cake -as this post proves - so don't fret about Cake Of The Week dropping off the face of the blogosphere any time soon.

I spent the best part of two weeks trying to work out the logistics for this cake. I knew I wanted to put caramel on top of swirls of icing that sat on top of cupcakes, but couldn't figure the flavour combination. I was originally going to try a hot chocolate-sour cream cupcake, but then I saw hundreds of pumpkin-based recipes popping up all over the internet and knew I had to make some more Butternut Squash Cupcakes.

This time I put cinnamon in the cake batter with the butternut squash, and unlike the original cupcakes I chose a Faux French buttercream icing - and, of course, the caramel. Interestingly, my last Butternut Squash cupcake attempt was also my first attempt at Swiss meringue buttercream - oh, how my skills have improved! To be fair, I had got myself a little muddled by the American measurements in the recipe I used and didn't realise quite how important it was to use obscene amounts of butter. The Faux French buttercream is no different in that respect, but I think it works better on cupcakes as it is much sweeter - sort of like vanilla ice cream. 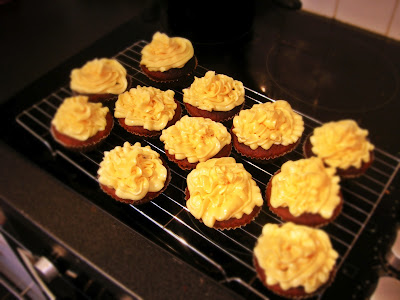 I love the Faux French and Swiss meringue buttercreams because they are perfect for using up excess egg yolks or whites that are lying around in the fridge, and are quite straightforward once you've lost the fear that their recipes seem to instill in most people (including me at first - see above and the Cinnamon Raspberry Cake). If you have a preferred buttercream or cake topper, by all means go ahead and use it: baking isn't any fun without a little experimentation. Similarly, if you like the idea of the topping but not the cupcake, just mix and match until you find a winner.

The recipe for the caramel came from Australian Women's Weekly's The Complete Book Of Cupcakes, Cheesecakes and Cookies. I've also had great success with one that Nigel Slater uses for Sticky Toffee Pudding.

Makes 12
Ingredients
For the cupcakes:


For the Faux French buttercream:
For the Caramel:
Recipe 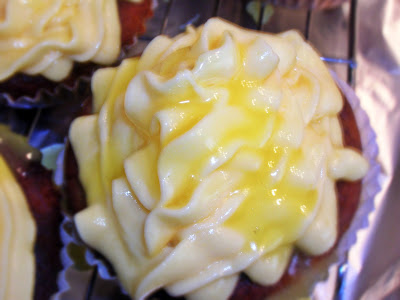 If you have any queries relating to jargon used in the recipe, take a look at The Basics. I intend to write a page about different buttercreams, but this will have to wait until I have more free time; I'll be happy to answer any questions you may have on the topic in the mean time, though.

Next Monday marks a year since I started this blog, so I'll be making a suitably celebratory cake (in my head, it's looking pretty good - hopefully this will translate to reality!)

Have a good week!