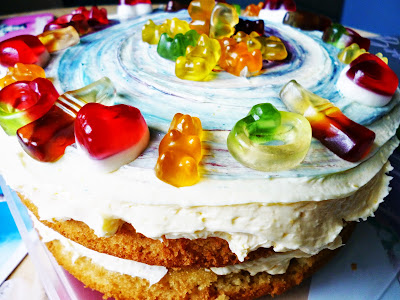 What started as a way to save money on gifts, whilst still showing that I care, has become a bit of a tradition. I am no longer the thrifty student I once was, but this doesn't stop me making birthday cakes for good friends of mine. I find that the ability to show that you know them well enough to make something they like, and that you would put in all the effort just for them, goes a long way.

I love baking for other people for several reasons. It not lets me design something to their tastes as opposed to my own (I'm rarely going to bake a cake on a whim if I won't like the end result). It gives me an excuse to make more spectacular cakes (time permitting). Most importantly, it means I will only be able to justify eating once slice because the cake was meant for someone else. Previous birthday cakes include Eight Layer Kahlua Cake (With A Rainbow Inside), Chocolate Brown Ale Cake and Vodka Lemonade Cake. 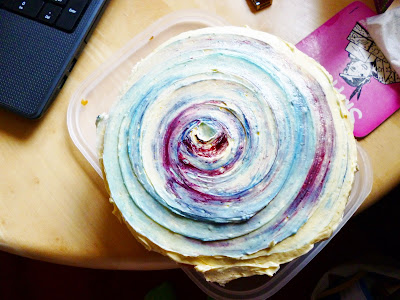 This Haribo Cake was made for a friend at work, on his 22nd birthday. It was very well recieved by my friend and all the others that we shared it with. I'll definitely keep this recipe in mind when I need to make a show-stopping cake but don't want to spend hours on decoration.

I wanted to add colour to the icing, so on a whim I swirled some gel colouring into the top layer of icing. It helps to have a cake turntable for this; all I did was put a bit of blue gel colouring on the end of a spatula, laid it at an angle in the centre of the cake and spun the cake around. I repeated this with some pink colouring, but it turned purple when it mixed with the blue. Very simple, but also very effective. 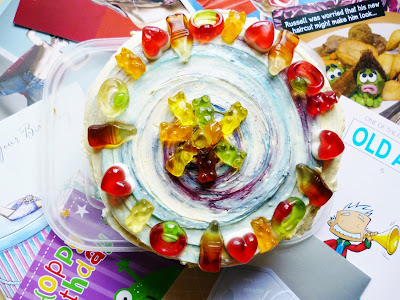 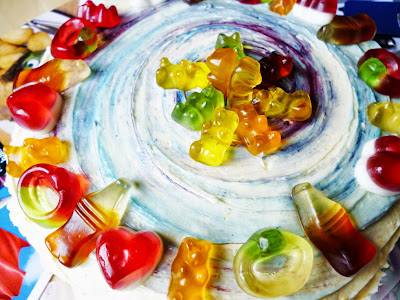