This is the final post from my three-part series about the three-tiered cake I made for some friends' birthdays last weekend (the other two cakes were a Vodka Rainbow Cake and a Mudslide Cake). Naturally, three 22 year-old boys needed alcoholic cakes so the final cake is made with Newcastle Brown Ale.

Originally, I was going to make the cake with Guinness, but I still had Brown Ale left in the fridge from when I made the Pineapple Upside Down Cake - I'm not much of a beer drinker. The beer may have been flat, but it still had all of its flavour so I saw no issue with putting it in a cake. 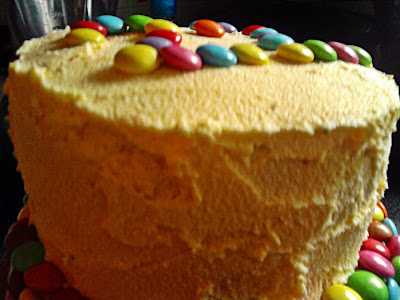 Cream cheese icing seems to be the standard for chocolate beer cakes, so I used my favourite recipe, discovered when I made a Carrot Cake back in September. It's a french buttercream with Philadelphia cheese whisked into it; I cannot express just how good it tastes - even if you don't make this cake, I sincerely advise you to make this buttercream and smear it onto something (or as Emma Freud suggested for Salted Caramel Brownies, just go ahead and smear it onto your thighs to save your body the trouble).

There is definitely something about beer and chocolate being combined in a cake. The cake was moist and had a great depth of flavour thanks to the beer; the texture was fantastic. The icing's texture turned airy and fluffy, as opposed to smooth and creamy, when defrosted (rather oddly) but it still worked very well, and as I say it was delicious. The others must have thought so too, as it when I last saw the cake before going home it had the most pieces taken out of it. 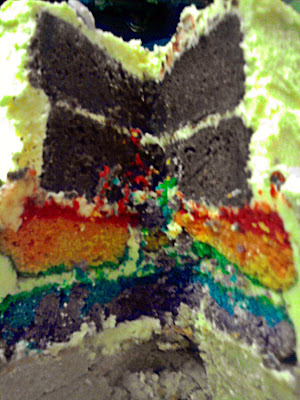 
For the cream cheese icing:
Recipe 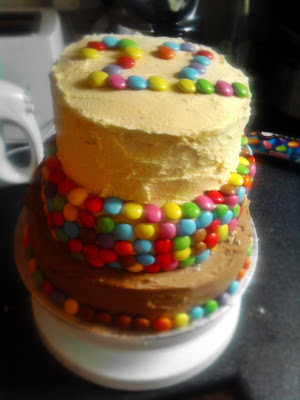 To make the three-tiered cake, I actually stacked the cakes before icing the outside. I sandwiched the different cakes together with the cream cheese icing because I had a lot of excess, but I could have used the icing so that it matched each cake. I'd been planning to decorate the Vodka Rainbow Cake with smarties, and in the end decided that decorating the other cakes with smarties would help to tie them together nicely.

I will be back later in the week with something Christmas themed - it is December now, you know!