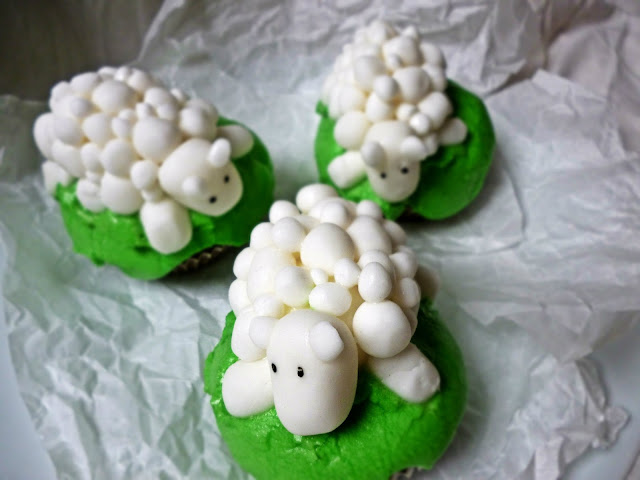 For some reason, seeing Amanda's Bubbly Baby Cupcakes over at iambaker made me think not of babies, but of sheep. Maybe it's an untapped part of my subconscious that misses the countryside (definitely not a conscious part - I may have been brought up in the middle of nowhere but I'm a city girl at heart) and Dartmoor, or maybe it's just the uncanny resemblance of those buttercream bubbles to cartoonish sheep's wool. Whatever the reason, I've had a load of fondant left over ever since I made the Portal Companion Cube Cake back in May last year, so this was a perfect excuse to use it up. 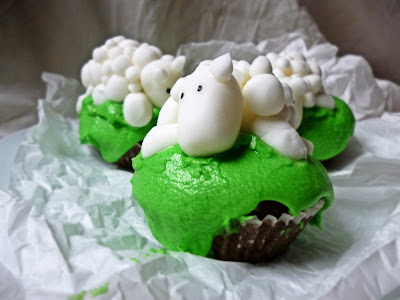 Fondant icing is surprisingly easy to use - all you need to do is shape it as required and use water to glue any pieces together. If you don't believe me, the cake mentioned above was my first time using fondant icing, and   the fondant flamingos on my Piña Colada Cupcakes were made the second time. White fondant icing also acts as a brilliant base for painting with gel food colouring or food colouring powder mixed with vodka, as perfected by my sister. The possibilities are endless! My only qualm with it is that I don't like it, so normally I try and incorporate the icing into a cake or add it to some buttercream, which I do like. 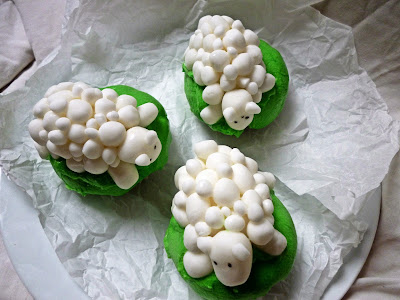 One thing to note is that fondant icing does not do well in airtight conditions, and appears to melt. If you leave it in a well ventilated area, however, your fondant icing can last for weeks (though I wouldn't recommend waiting that long to eat it!)

I put these sheep on top of chocolate cupcakes covered in green buttercream, so if you bite into the cake it's like taking a cross-section of the ground the sheep is walking on. For a more realistic effect, you could even put gummy worms in the 'soil', though I feel that might detract from the sheep slightly. 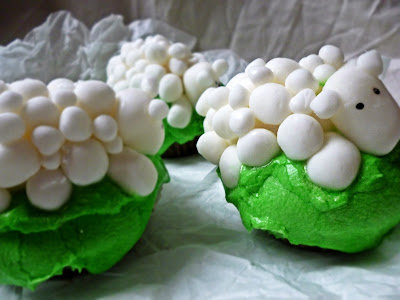 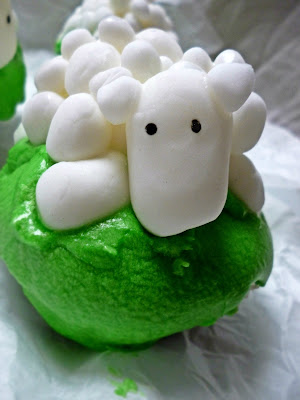